MOB or Man overboard is something that you really don't want to experience while at sea (or really anytime) so they teach you in sailing school how to deal with it. While practicing it is ideal to have 3 people, each with specific roles . One person steers the boat, one person watches the MOB at ALL TIMES, and continues to point at them to guide the captain, and the third person (and others if avaliable ) assist the MOB aboard when they are rescued.

When you only have 2 people on board, and one of them is the MOB, then you have a very difficult situation.


Yesterday we had an unintentional MOB drill when my hat went flying off my head. It was floating nicely,so we decided to attempt to rescue it. I played the role of the pointer while Bob drove the boat in figure 8's around the hat, trying to position the boat close enough that I could reach it with the boat hook. (You remember our boat hook?)


After several close attempts I decided to get in the dinghy (Melody) which we tow behind Rhapsody. 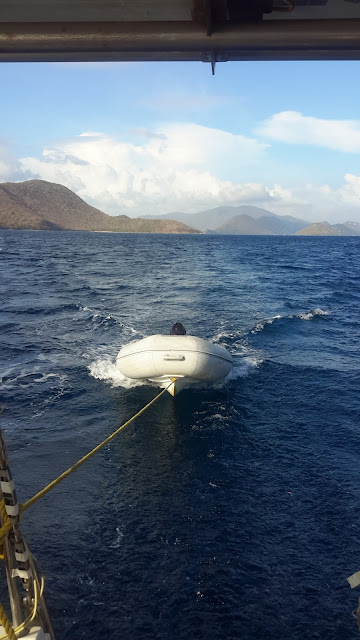 We pulled Melody in closer and Bob slowed down.This allowed me to be closer to the water and a better chance to grab the hat as it floated by. Even this took several attempts,each time having to reposition Rhapsody for another run at the hat. In the end we were successful,  and the hat was no worse for the wear, but it really drove home the point of how difficult it is to rescue a MOB, and we had two people to carry out the procedure. It would have been easier if we were rescuing a conscious swimmer who could assist in their own rescue (the hat was not very cooperative ), but if there was only one person on board and the person in the water was not able to assist...

This is why we have a very strict rule aboard Rhapsody.  Under no circumstances are either of us allowed to be a MOB!